How I Got Started

When I started out with Laters (an Android app for Read it Later), it was a play project, it was something I developed on the tube on a small underpowered netbook to and from work. I’d read about lean startups (much of it via Read it Later!) and it never occured to me that this could be applied to an Android app. So I got a bit ahead of myself in terms of a Minimal Viable Product (I realise now I could have released even earlier) but it forced me to release it early, rather then wait until feature rich, so I could learn from this MVP.

Most written examples about Lean Startups revolve around the Web. So this is an experiment in itself, to see if I could apply the techniques in an mobile phone app environment. My biggest fear with a minimal app, is people will 1 star it in the Android Market and leave unhelpful comments like “Rubbish, does nothing”. Thus putting off other people from installing it. The Android Market is poor for constructive feedback, there’s no place to open up a dialog and find out why it was rubbish and how it could be improved. There’s no way for someone to ask for something and get notified that it’s now in the app. Community or social it’s not.

How I’m doing it 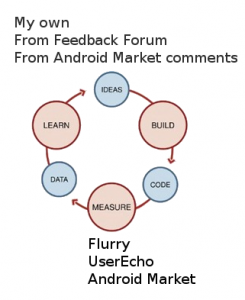 I’ve got my MVP. So my first release has just enough features, to make it usable and allow me to learn what people would like from the app. My ideas (or guesses) for cool features that haven’t been built but need verifying, come in the form of ‘Not Yet Made’ feature dialogs. 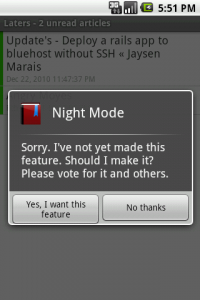 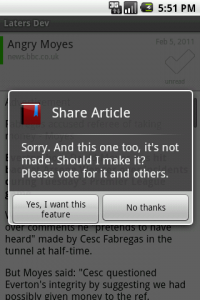 I’ve incorporated Flurry Analytics to measure how people are using the app and whether they are trying to use the ‘Not Yet Made’ features. In combination with those, I have links through to the Feedback Forum provided by UserEcho. Here people can discuss new features or problems and vote on features they would like. Android Market gives me some feedback through comments, ratings and usage but this not very useful.

I’m not sure I could apply split A/B testing? Any thoughts?

By taking the data from Analytics and the Feedback forum, I should be able to decide which features to make, which to ditch and how current features are being used.

I’m no lean startup expert. I’ve applied lean principles to software development in the past and to this project but this was new for me. Another chance to learn, a core principle of Lean. So whether it’s actually lean startup, I’m not sure. I’d be interested to get some feedback from people who have some experience.

If anyone would like to get involved, Laters is in the Android Market. Give your feedback and shape the app. Atypically I’ll be moving through the build-measure-learn loop quickly, so expect some cool stuff on the way. An impending baby might put the brakes on this but bear with me and I’m sure lack of sleep will mean nothing to me and I’ll back making those features.

The second part of this article is now available.